Yes, spring has come around again and there’s all sorts of new life and renewal happening here. 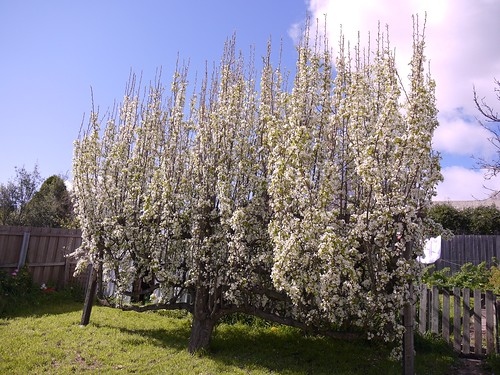 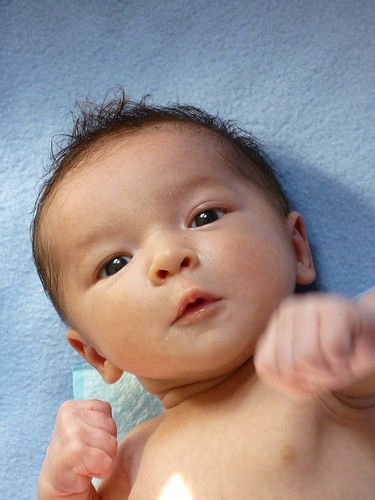 As you can see I haven’t been idle, just concentrating on growing other things. 🙂 More posts soon as I emerge ?? from the newborn fog. . .

Posted in Uncategorized | Comments Off on Spring

Yeah, I know, it’s been ages.  I do have an excuse though: in addition to growing things in the garden I’ve been growing a new human.  And it’s quite exhausting.  We’ve been told he’s a boy, and his expected arrival is in just under 3 months – 17 August.

The great irony of all this has been that for the last 6 months I haven’t had food cravings, I’ve had food aversions; and they’ve been aversions to things such as beautiful leafy greens from the garden, garlic, etc.  Sigh.  I’m told it should all sort itself out once he comes.

I’ve been ignoring our darling garden almost as much as this blog.  We still get food out of it and of course have our monthly sessions with FiMBY, but as it gets more difficult to bend over I have less and less capacity to do much!  But things still tick away – perhaps it would be neater and have fewer weeds if I was able to do more (and the compost pile would be turned and a new one made!), but really veggies will just grow not matter what.

At our FiMBY session on Saturday we took out the sweet corn from Big Yellow.  There was a lot of ‘volunteer’ coriander in the bed as well (I think I spilled some out of my bag of seeds), our last cucumber, and a few of the last tomatoes.  Add to that taking the baby leeks that weren’t thriving in big blue and a few cayenne chillies and it seemed obvious what we would be having for dinner that night: roasted sweet corn salsa with chicken and black bean quesadillas.  Yum!  Here’s some before and after photos of the ingredients: 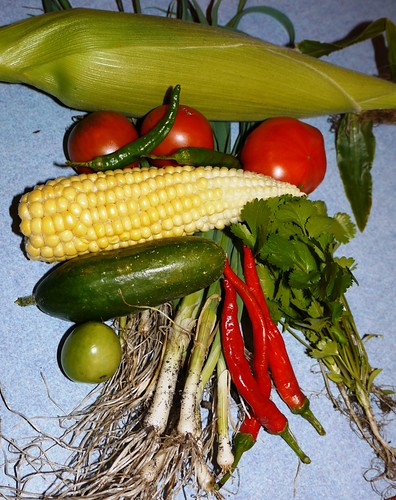 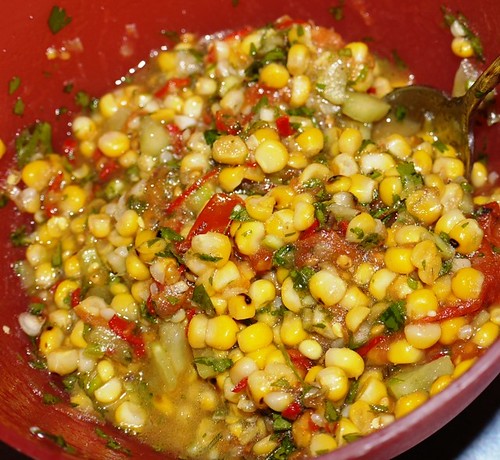 With lots of zucchini and pink eye potatoes coming out of the garden, and being too lazy to go to the grocery store, rösti seemed just the thing.  Usually I make rösti just with potatoes, but I added some of our cocozelle zucchini too. 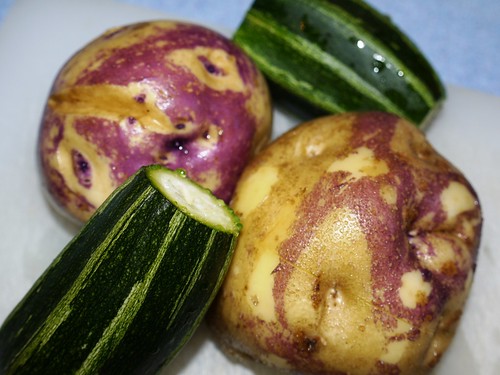 For the rösti just grate the potatoes (and other vegetable if you’re adding something else).  Squeeze out excess moisture, then put into a frying pan with hot oil.  I usually start with the pan hot, then turn it down.  I just scatter the potatoes over the surface, then press down slightly to form a large flat disk of potato-ness.  If you cook it slowly you’ll wind up with squishy but cooked potato in the middle and a golden crispy outside.  If the heat is up too high, the outside will burn before the inside has cooked.  Once the first side looks done (i.e. crispy and yummy), flip over to do the second side.

I hadn’t been to the shops, but I did have mozarella in the fridge as well as some basil and ripe tomatoes.  So after I flipped over the rösti I sprinkled it with the cheese so it would melt, then just before serving topped with tomatoes and basil.  How could you go wrong! 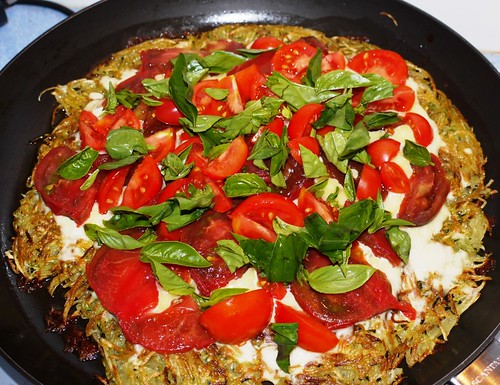 The toppings we usually have are:

Posted in Recipes | Comments Off on Harvest: Rösti

This is mainly a placeholder to remind me to get moving on updating this blog!  I’ve been exhausted lately so just haven’t kept up-to-date.  I have many photos, and have even uploaded some of them to Flickr, but I have a lot of catching up to do!

At our February mentoring session we planted some more seeds, a couple varieties of carrots, more of the heirloom beetroot mix, more lettuce in the wine barrels, corriander, parsley, dill, and spring onions.  We also planted some spring onion seedlings.  The spring onion seed and seedlings we divided between Big Blue and the Berry Patch because I’m intersted in how the different soils affect the plants; we’ve already seen a big difference between the leeks in Big Blue and in the Berry Patch.

The potatoes in Little Red are ready for harvesting. There were some too close to the surface that got a bit green, but there are still MANY below the surface! 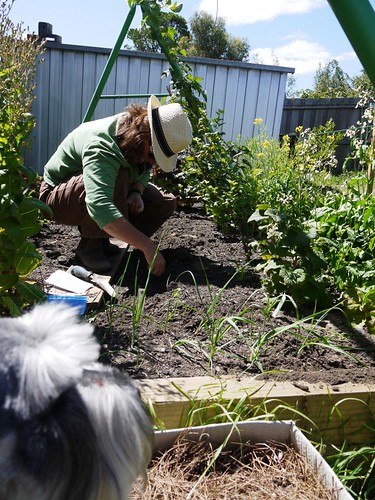 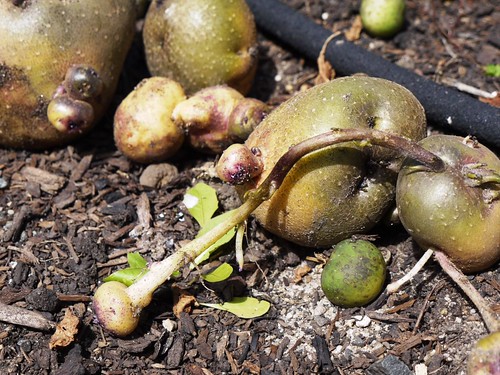 Good Example of How Potatoes Grow (and how green they get close exposed to sun!) 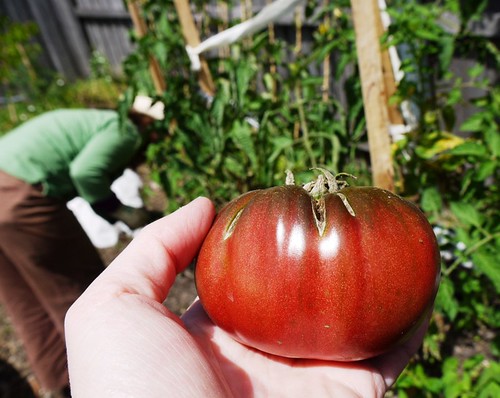 Yes, I know, WAY behind on blogging here and at Snuva’s Haunt.  But that’s the way life’s been lately.  I’ll catch up – eventually!

Saturday was the FiMBY Garden Tour.  Basically a group of FiMBYers visiting two FiMBY gardens, Pete’s Patch, and then finishing up at Christina’s for lunch.  Our garden was the first one visited. 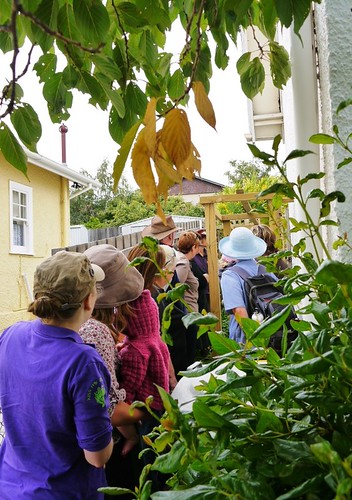 Tour Group Trying to See Apty and His Harem; No Idea What Christina Said! 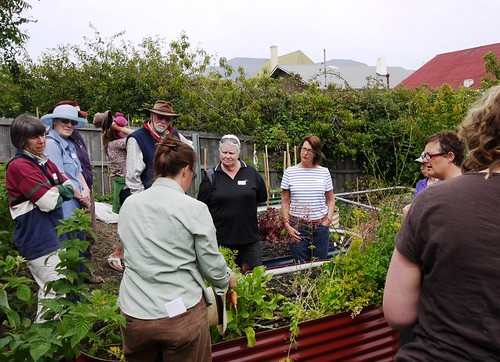 It was lots of fun.  Christina did most of the talking and leading people around, so we just chatted with people and answered the occasional question.  Lottie, who I had with me on a lead, was VERY well behaved and sweet.  So she received lots of pats.

Next we all went to Pete’s Patch at the Royal Tasmanian Botanical Gardens.  It’s always fun to see what they’ve got in the garden and how they’re growing it. 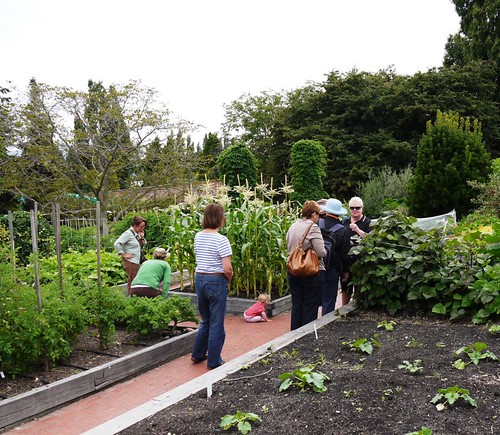 Next we were off to Sue’s garden. It’s fairly small compared to ours, however she seems to do a great job of getting what she wants out of the space! And she’s not afraid to move things around to see where they work best. 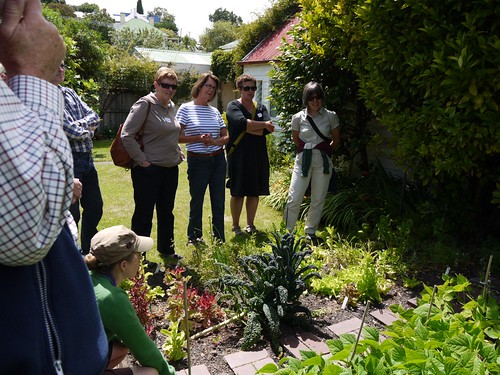 After Sue’s garden we were off to Christina’s for lunch. We were also able to visit the rabbits again, this time without a crazed schnauzer in attendance. 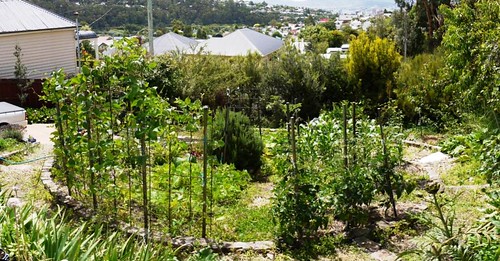 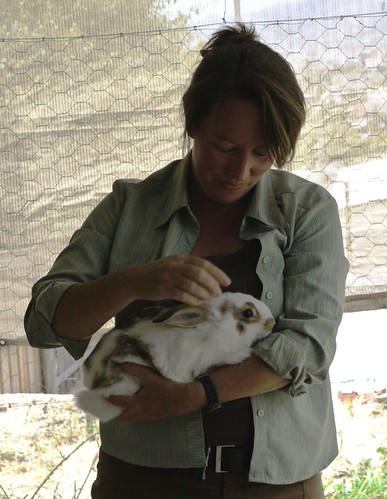 I hope we do it all again soon! It’s fun snooping in other people’s gardens! 🙂

Posted in FiMBY Activities | Comments Off on FiMBY Garden Tour

This was such a great after-work meal – really quick and yummy.  Just a green chicken curry – I even cheated and just used bought curry paste – but it makes SUCH a difference to use fresh-from-the-garden veggies!  The carrots were fragrant, and the peas were sweet.  Top it off with some fried scallions and some mint, corriander, and vietnamese mint from the garden.  Yum! 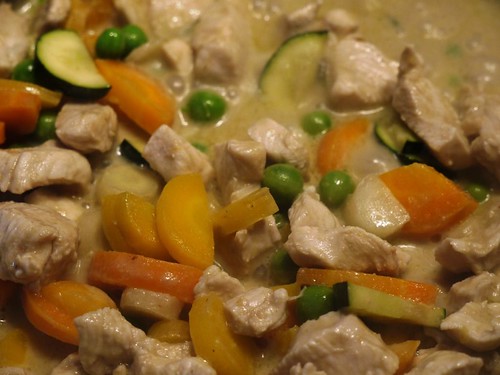 Posted in Recipes | Comments Off on Harvest: Green Chicken and Veggies Curry

After Christina pulled some of our Kipfler potatoes out during our December garden craft session, I was really keen to use them!  I was secretly thinking of them the whole time I was at taketina.

I washed them and rubbed off the skins; I thought they glowed like opals.  To go with them we also got some young garlic, some sugar snap peas, and some broadbean plant tops out of the garden. 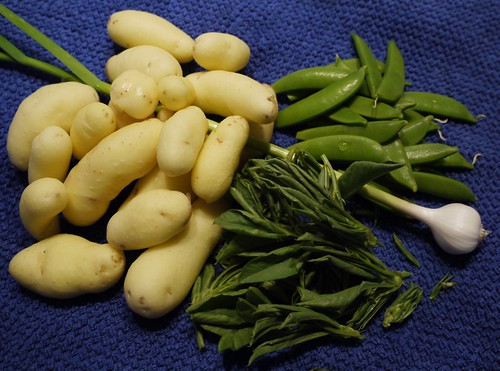 To these we added some chorizo sausage, chicken, cherry tomatoes, and sour cream.  It was fantastic! 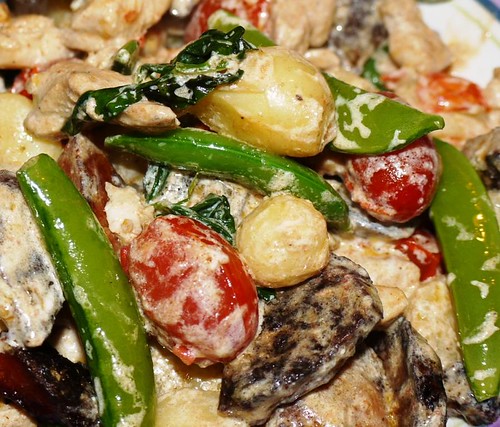 Another EXTREMELY late post.  I’ll adjust the date later; this session was 11 December 2010.

Another month, and another wonderful session with Christina.  As usual she started out by going around the garden and seeing that was happening and what was growing.  The night before we’d had some wind really rip through the garden, so one of the things she helped us do was tie up the peas that had completely fallen off their teepees in Big Blue back up.

We discussed what would happen in Big Yellow.  Our broadbeans still weren’t ready for harvesting, so she took the zucchini we were going to plant back with her and we discussed what would go into the bed next time.  After the broadbeans finish we’ll put in corn, some cucumbers training up, and another zucchini or two.  CORN!  🙂  She also advised us to start pruning the tops of the broadbean plants off to just above where it was fruiting so the plants would put energy into the broadbeans instead of producing more and ever more flowers.

Before doing some planting we had a carrot tasting session.  The Lubyanas are probably the favourite, but all had a different and lovely flavour.  The Royal Chantenays were really carroty.  The White Belgians seem to be a little hit and miss; they have a lovely spicy flavour, but some are really woody and some seem OK. We cleared out Asian greens from the end of Big Blue and planted some more root veggies, a heritage beetroot mix, some White Belgian carrots and some Nantaise carrots. 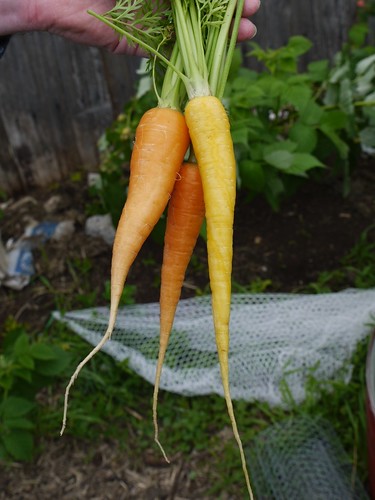 Christina helped us clear out the last of the tat soi, mizuna and bok choi from the patch under the swings – one of each plant was kept and tied up for seeds.  We’ll transplant lettuce seedlings from the ‘nursery’ section to fill it all back in. 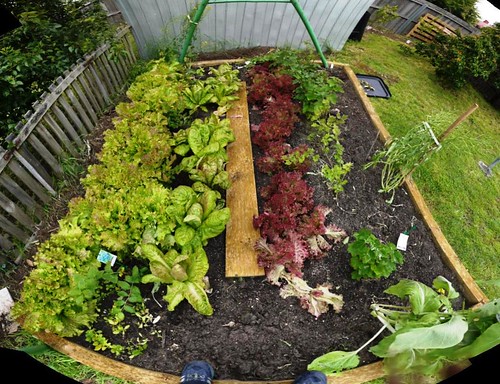 Christina checked out and helped tie up our tomatoes.  She also noticed one of our Kipfler potatoes wasn’t doing well, so it’s lovely offspring were harvested: 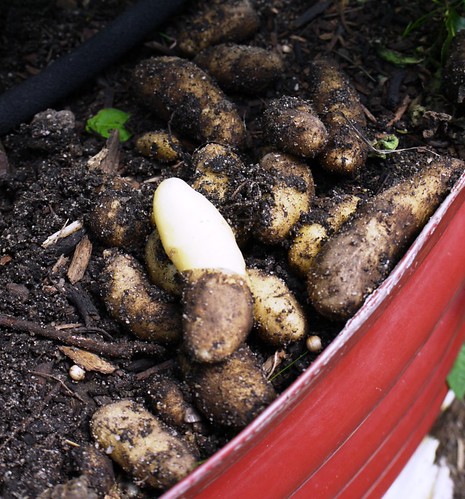 Lady Birds to the Rescue!

My dill was under attack by aphids.  Christina said to squish the aphids, which I started doing.  But then I saw several of these amongst the dill and corriander: 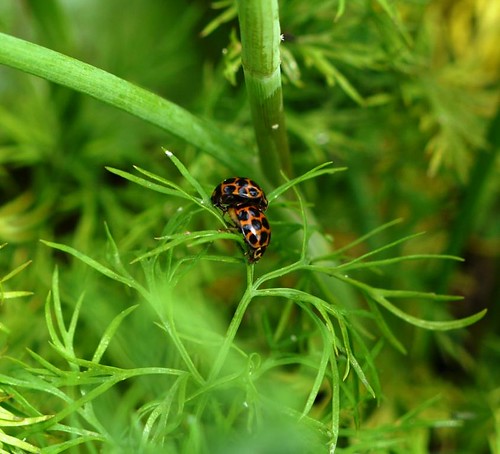 And like magic the aphids are disappearing my forest of dill seems to be happy again. There’s something to be said for not immediately spraying and letting the good bugs win. 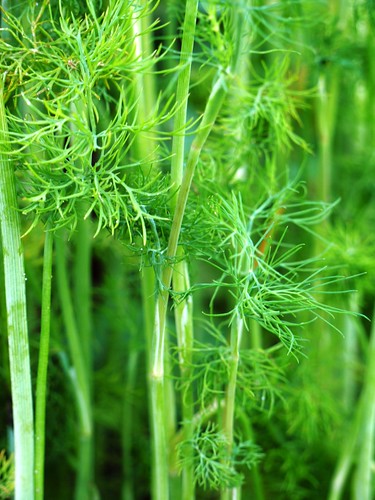 Posted in Observations | Comments Off on Lady Birds to the Rescue!

Christina seemed surprised when I mentioned it, but our Detroit Red beetroots are certainly a healthy size for harvesting: 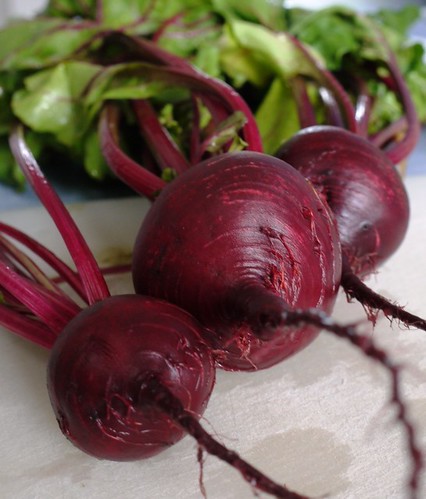 But obviously they are! And have successfully been turned into a filling for (not very attractive but tasty) ravioli: 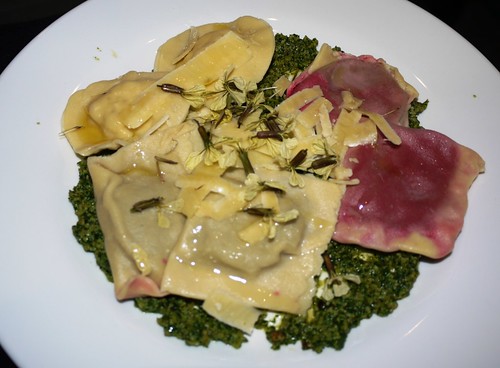 The other two types of raviolis were chicken and mushroom & white truffle mousse.  Served on top of a pesto of parsley (from our garden) and walnut (from another local garden) pesto and topped with rocket flowers.  No, not the greatest photo, but yummy!