Plantings in the Mediterranean Zone

Last night after work we finally got our wine barrels planted out.  My husband divided a bag of organic compost and a bag of alpaca poo between the 4 barrels.  I went through the alpaca poo to pull out bits of grass that must have gotten into it when it was being shoveled out of paddocks.  Then Scott mixed it all through and planted the trees!  We have 2 varieties of olive, a Eureka lemon, and a small bay tree.  We also moved our two potted limes here (I top-dressed them with a bit of alpaca poo).  I gave the olives and lemon a bit of a hair cut too.  I don’t know why, but I’m quite nervous of pruning them.  I whack away at shrubs quite liberally, however I guess I’m so eager for these little guys to grow and fruit that I hate to chop them back.  But I know it’s for the best!

I took photos this morning, but it’s all looking a bit messy at the moment.  By the time we finished last night and I’d watered everything in it was after dark, so there is messy soil and prunings everywhere.  Plus the herb bed needs mulching. 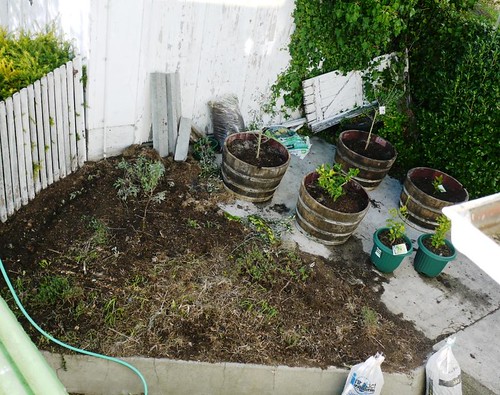 This entry was posted in Establishment, New Plantings. Bookmark the permalink.